Colour Create DT and another oooops!!

So many of you seemed to like my choice of all white last week, so thank you all for the fabulous cards you entered. I couldn't possible comment on all - far too many (especially with a computer that's misbehaving and Mr Blogger playing silly games at the weekend) - but I popped in and looked at them all and was amazed and inspired by the wonderful creations you came up with.

The lovely Karen's choice this week at Colour Create and she chose blue, white and silver with the optional extra of glitter and winter. 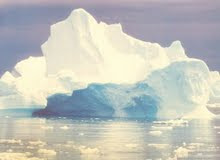 I really enjoyed this one inspite of my oooops's - more than one I might add. I thought I would do a half-acetate card - this together with the silver made it so difficult to photograph. I stamped the sentiment/greeting on the inside, forgetting that it would show through th acetate and had to shuffle the ribbon and bow across and tweak it so the it wouldn't show. I coloured the parcels with a silver glaze that doesn't show, although you might just discern it in the close up.

The next oops hasn't happened yet - I'm flying back to England on Wednesday to sort out my car and arrange to have it transported over here to Germany  (cheaper would you believe than using the ferry and driving). This means I will have schedule this card - oh dear - this has gone wrong when I've tried it in the past but who knows I have to get it right sometime - lol. 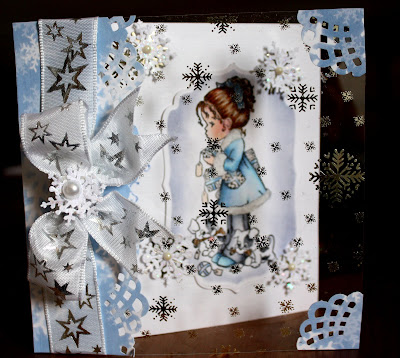 I coloured the Sugar Nellie image 'Santa's little Helper' with copics, cut her out with the Spellbinders Labels 4 die. The snowflakes are cut with the EK Succes snowflake punch and the Provocraft snowflakes 2 die. The border is cut with the Carla Craft Macaron punch as are the corners. 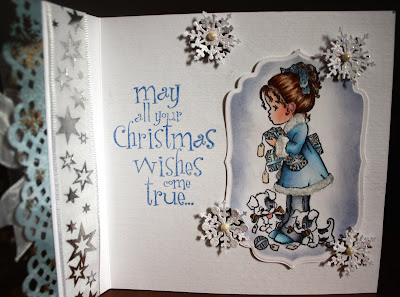 I had intented to put the image on the outside of the acetate, but after playing around decided it looked better on the inside with the snowflaked acetate sitting over the image. The sentiment is from Lakeland Plastics and the ribbon and pearls from stash. 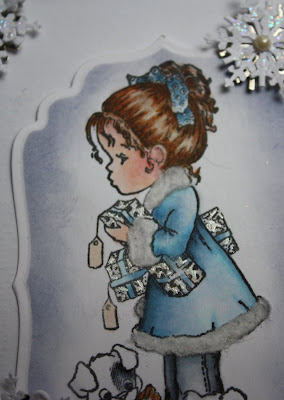 I've noticed that Copic Creations have red hair as their current challenge so I will enter this card as I coincidently gave my little lady red hair.

A fabulous card Heather, I adore this!
Love your colouring and the colour combo is perfect with this cutie.
Looks like your scheduling worked this time hoorah!!

This is so gorgeous, Heather! You amaze me with your creations! Just beautiful!

You crack me up! I wish my "oops" cards turned out like this! Mine end up in the trash! lol! This card is amazing! The image looks like a beautiful painting - your colouring is stunning as always! Have a safe trip! I will be thinking of you.

WOW darling this is soooo stunning !!!! such a beautiful image and coloured perfectly !!!! and i love the acetate and snowflakes xxxx

Hi, Wow what agorgeous card love everything the image,the colours everything..just hope I can get my colouring as perfect as yours one day..
Mandy xx

Hi Heather Mr. blogger seems to have worked for you this time & its gorgeous, this adorable image is coloured to perfection as usual..& wow love this colour combo gret use of the acetate makes a fab outer card base...

aww Heather as ever a stunning creation hun, i luv the design fantastic, coloured perfect as always. Hope you get the car sorted ok, sue.x

Oh but I am totally inspired Heather!!!! I love her in blues!!!! Just gorgeous and I have never tried a card like that! It looks sooo cool! Love it to bits! Hugs, Dena

I have to tell you Heather that this card is one of my favorite cards!!! It's just STUNNING!!!

I hope all works out with you getting your car sweetie...
hugs, Janiel

another stunning card Heather - and you didnt need you second oooops - it worked :)

Oh this is just so beautiful. One can actually feel the coldness when looking at the gorgeous image. Love the transparent front.
Hugs
Desire

Stunning. Sheia adorable and her hair is perfect. Lovely colours and those snowflakes a beautiful

Wow!! a fantastic card.
Love the colour combo, the acetate front and your colouring is ace

Wow, Rica - another quite spectacular creation from you - you have so many fabulous ideas!! Love the colours too!! Juliexx

Wow, such a beautiful card!

OMgoodness, Heather, this card is amazing!!! Beautiful coloring and the acetate is terrific.

Your coloring is amazing.. and your design fabulous.. in other words, I love the card

Stunning card Heather. The design is just gorgeous, as is that C-U-T-E Sugar Nellie image. The colours are beautiful.

Just when I have my descriptive word chosen for this card, I see that Sandie just above me has used it. But it is worth repeating. Stunning! You've put this together with such charm -- and I do love the image on the inside! Save travels.

Heather, this is wonderful! The snowflakes and ribbon look soo gorgeous! I love the use of acetate and the corners looks fab!
There's something on my blog for you! Have a lovely weekend! :)
Love, Georgia xx

Rica, wow your card is stunningly beautiful. Love love love it, did I say how much I love it. The colours and LO is amazing. Thanks for sharing.
Hugs Jodie from Oz

I do so love acetate Heather, and your snowflakes are soo effective on the acetate. Your card is absolutely beautiful,
Love Sarita xx

Oh, Heather! This is amazing! I love the acetate treatment and all the sparklies. But I especially love your stunning coloring!

I saw this over at Color Create, it is just beautiful! You did an amazing job coloring your image. thanks for sharing!
~Pam
http://stampsinc.blogspot.com/

Gorgeous sweetie - LOVE the acetate and the silver. Have a great trip. I just got back from mine, hence the silence from the last 2.5 weeks of unreliable internet. Now I'm making up for it!
Take care!
Rosey XX

Have left you a little something on my blog! Hope you're well!! Juliex

Wish my oops cards would turn out half as good as this. It's beautiful Heather! I found some acetate with silver snowflakes on it while cleaning out my stash today, bet it won't look no where near as good as this on my card though lol.
Good luck with the car!
Hugs Lora xx

Wheee this is just so gorgeous and cozy!!! Love it Heather!

Heather this is stunning hun, so beautiful
hugs Mandy xx

I could be on your blog all day long -- drooling the day away! ha ha ha ha ha. This is amazing...just like you :)

Rica, this is a gorgeous card! What a beautiful image, and beautifully colored. Thanks for joining our CC challenge again. 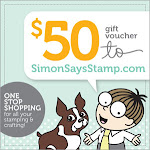 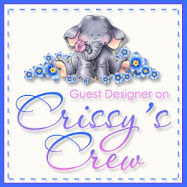